The Wedding season is fast approaching, so it may be time to find a wedding singer! Look no further. I, Megan O’Brien have been singing professionally for 7 years (and unprofessionally for the rest). I am available for ceremonies, including full Catholic Masses, and receptions. If you are in need of more singers or musicians, I have an extensive network of talented colleagues and instrumentalists. If you would like help with the entire music program, it is my pleasure to offer my expertise in all things music, in all styles and genres. If you are looking for the highest level of professionalism for your wedding day, you have come to the right place.

If you haven’t met me yet, here’s a little look into my life through the eyes of the Press Citizen.
http://www.press-citizen.com/apps/pbcs.dll/article?AID=2014301300003

This season, I (Megan O’Brien) have been on a whirlwind of auditions mostly operatic in nature. However this weekend, I ventured to Chicago, Illinois with on of my students and two close friends to audition for NBC’s ‘The Voice’. 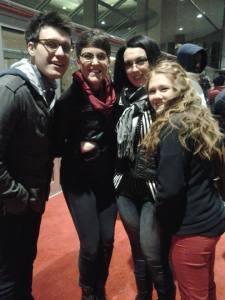 This was a relatively long process, and took about 4.5 hours to go from one check point to another. When we finally got into the private judges room, I realized I had never (EVER) been so nervous in my life! Let me clarify; I am a self proclaimed “audition expert” and have auditioned for multiple companies over six opera seasons while also being part of various masterclasses in the direction of audition etiquette. This, however, was nothing like a normal 7 minute opera audition with my perfect audition dress and sensible closed toed heels. Instead I wore JEANS and BOOTS, and had 30 seconds to impress a guy in a White Sox T-Shirt.

Nothing could shake my nerves. In the small, echoing room, ten of us sat waiting for our name to be called. I heard some really pleasant singing voices, and kept thinking, “I would love to to be their teacher!” You could hear belting baritenors from the next audition room over. Everyone had a good voice. When my name was called, I didn’t have the chance to declare my usual “Hello, I am Megan O’Brien and I will be singing…” instead, ‘T-Shirt judge’ asked “What will you be singing?” and all I could blurt out was “Black Velvet!” I tried my best to muster an Ab starting pitch, and then I ran with it. (Black Velvet is my go-to-roll-out-of-bed-and-kill-it song.) I sang it well, and it was the right song choice.

Unfortunately, none of the singers in my audition room were called back including myself. I was a bit bummed, but quickly realized that the talent this year is so outstanding, that there must be a certain *something* that one judge at that singular moment is looking for. (Finally, my culmination of audition experience helps me in this situation!) Whatever that *something* is, no one can truly ever know. This is no different from auditioning for an opera casting director. A singer cannot control the judge’s mood, personality or overall opinion. We can only show up with what we have available and knock it out of the park. I love auditioning, and this was a truly great experience! Every audition is a chance to learn something new about yourself, and I believe ‘The Voice’ has nudged me to get out of my comfort zone every once and a while. ‘The Voice’ is one of my favorite T.V. shows because they are extremely private and selective in their process of finding the VERY BEST voices possible. I wouldn’t have it any other way.

P.S. I am currently waiting on news from my student’s audition today. I have word that it’s very possible she has been called back!

P.P.S You can find more picture updates from my twitter accounts @MeganSingsOpera and @OBrien_Studios. Early this morning one of my tweets was “favorited” by Daniel Bradbery (Winner of ‘The Voice’ season four)!! I feel pretty special.

Every year Singers from around the country compete/audition in order to sing on the Metropolitan Opera Stage in New York for a spot in the program. This year I competed with 27 other singers for a chance to move onto the next round. Here is a picture of me and my friend Jessica Faselt, who was one of the winners, with a $1000 dollar prize! 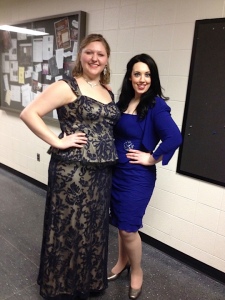 Jessica will be moving on to audition in St. Paul against eight other singers. Only one singer will move onto New York. I have my fingers crossed!

The Met Auditions are at the highest level of competition, so I want to congratulate everyone around the country who participated, including many of my talented friends. 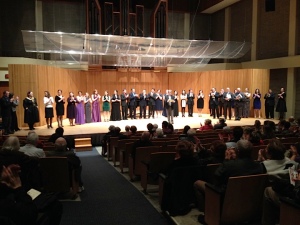 You can find all the district winners at http://www.moncuppermidwest.com/index.php?option=com_content&view=article&id=66:iowa-district-201314-results&catid=9:iowa-district&Itemid=5

If professional Opera singers got together and sung Christmas Carols, this is what it would sound like! Voice Lessons in Iowa City, Vocal Lessons, Music Lessons.

This Holiday Season, O’Brien Studios’ Opera Quartet will be Caroling in the Pedestrian Mall, as well as varying downtown Iowa City locations! Our goal is to promote small local businesses, while they in turn support the musical arts. If you want to hear Christmas Caroling at it’s finest, come out to support us as well! I will be continually updating this schedule as we add new sponsorships. 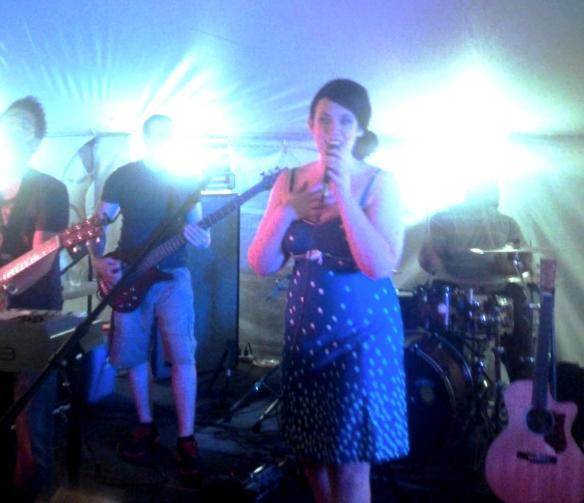 I am taking new steps every day to move forward with technology, while also making it easier for my students to continue lessons. I now accept Visa, Mastercard, Discover, and American Express!